Women carry photos of their slain daughters at a march in Ciudad Juárez, Mexico. 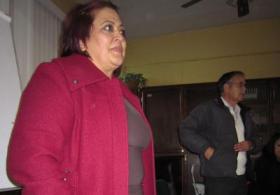