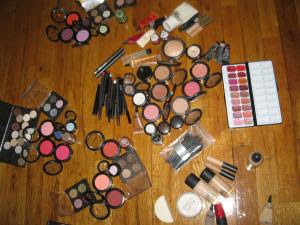 Foundation, blushes and lip gloss by MAC Cosmetics. (AP file photo/Courtesy of Gordon Espinet)
EL PASO -- A cosmetics line with a border theme that for some evoked the notorious Juárez women's slayings may actually benefit organizations that help low-income women in Mexico.
MAC Cosmetics announced it would donate $100,000 to a nonprofit organization with a record of helping women in need and that can directly improve the lives of women in Juárez.
The FEMAP Foundation in El Paso is one of several organizations that submitted proposals for funding to MAC Cosmetics in New York.
In a telephone interview, John Demsey, MAC Cosmetics president and chairman of the MAC/AIDS Foundation, said the company is reviewing the proposals and will announce the results in coming weeks, along with changes in the cosmetics lineup.
"We found ourselves in a position that we could do some good as a result of this," Demsey said, "and that's why we're taking this opportunity to do right by what was wrong in terms of poor association, at the same time raising awareness on something that's a very important issue that people should know more about."
The donation pledge stems from controversy over a collection in the MAC Cosmetics/Rodarte fall fashion line. Fashion blogs like The Frisky said names for the lipstick, blush, eyeshadow, lipgloss and pigment in the lineup were in bad taste because they trivialized the notorious women's murders.
The cosmetics product names included "Juárez," "Bordertown," "del Norte" "Ghost Town," "Quinceañera" and "Factory."
According to Vogue magazine, the makeup collection was inspired by the landscape of Juárez after a brainstorming trip to the border by two Rodarte designers.
The criticism spread rapidly and turned into a worldwide headache for MAC, a branch of Estée Lauder.
The company responded with the donation pledge, and said changes also will be made in the cosmetics lineup. The changes will be announced later.
"We sent our proposal to MAC last Friday, and we were told that the process is very competitive because several groups submitted requests," said Anna Aleman, FEMAP's executive director.
Aleman said FEMAP, a nonprofit that operates programs aimed at helping low-income women in Juárez, is requesting money for its nursing school scholarship program.
"The school graduates about 50 students each year. We estimate that $100,000 would pay for scholarships for 99 students," Aleman said. "All of them are needy students who struggle to pay for their studies. We provide partial scholarships to help them complete the three-year program that will give them a new career. We're glad that the violence got publicity because girls are still disappearing in Juárez."
Marisela Ortiz, co-founder of Nuestras Hijas de Regreso a Casa (May Our Daughters Return Home), an advocacy organization for the families of the Juárez victims, said a MAC representative contacted the group about the controversy.
"We decided not to submit a proposal for funds, but we also do not believe that the fashion and cosmetics lineup is wrong," Ortiz said. "We welcome anything out there that brings attention to the murders and continued disappearances. We do not believe MAC had any bad intentions. We've heard that some people are accusing MAC of profiting from the murders, but that is not true."
This is not the first time high fashion and glamour have figured in the issue of the Juárez women's murders. In 2006, Dolce & Gabbana sponsored an event in Los Angeles honoring the Salma Hayek Foundation. A video about the Juárez women's murders was shown at the black-tie event to raise awareness.
Jennifer Lopez, who played an investigative journalist in the movie "Bordertown," which is about the Juárez murders, was criticized by some groups who said she was too glamorous for the role.
Other organizations that provide assistance to girls and women affected by the violence in Juárez include Casa Amiga, a rape crisis center in Juárez, and the Frontera Women's Foundation in El Paso, which offers scholarships to teenage girls and adult women in Juárez. No one from either organization was available late Monday for comment.
Before the recession, more than 300 maquiladoras employed thousands of women in Juárez. More than a fifth of the murdered women worked in one of the assembly plants.
More than 800 girls and women have been murdered in Juárez since 1993, according to Mexican officials.
Diana Washington Valdez may be reached at dvaldez@elpasotimes.com; 546-6140.
en 7:26